Oh my, what to say about these two amazing places… Oaxaca and Mazunte. Easily the two biggest highlights of my Mexico trip and tour with my Spanish group.

Our intro to Oaxaca was not great, a late arrival after a long long drive to an obscure guesthouse in the middle of nowhere. We were tired, dusty, hungry and in need of a good bed. A frog (!!!) decided to latch itself to my bag upon the pitch dark arrival, which only served to exacerbate the situation more! As we found out… given the popularity of Oaxaca during day of the dead season, accommodations are booked up fast and this was one of the only ones left. Definitely aim to stay in the City center if you go!! It’s an amazing city with great nightlife and you will get out so much more.

The morning wake up view at least cheered us up. 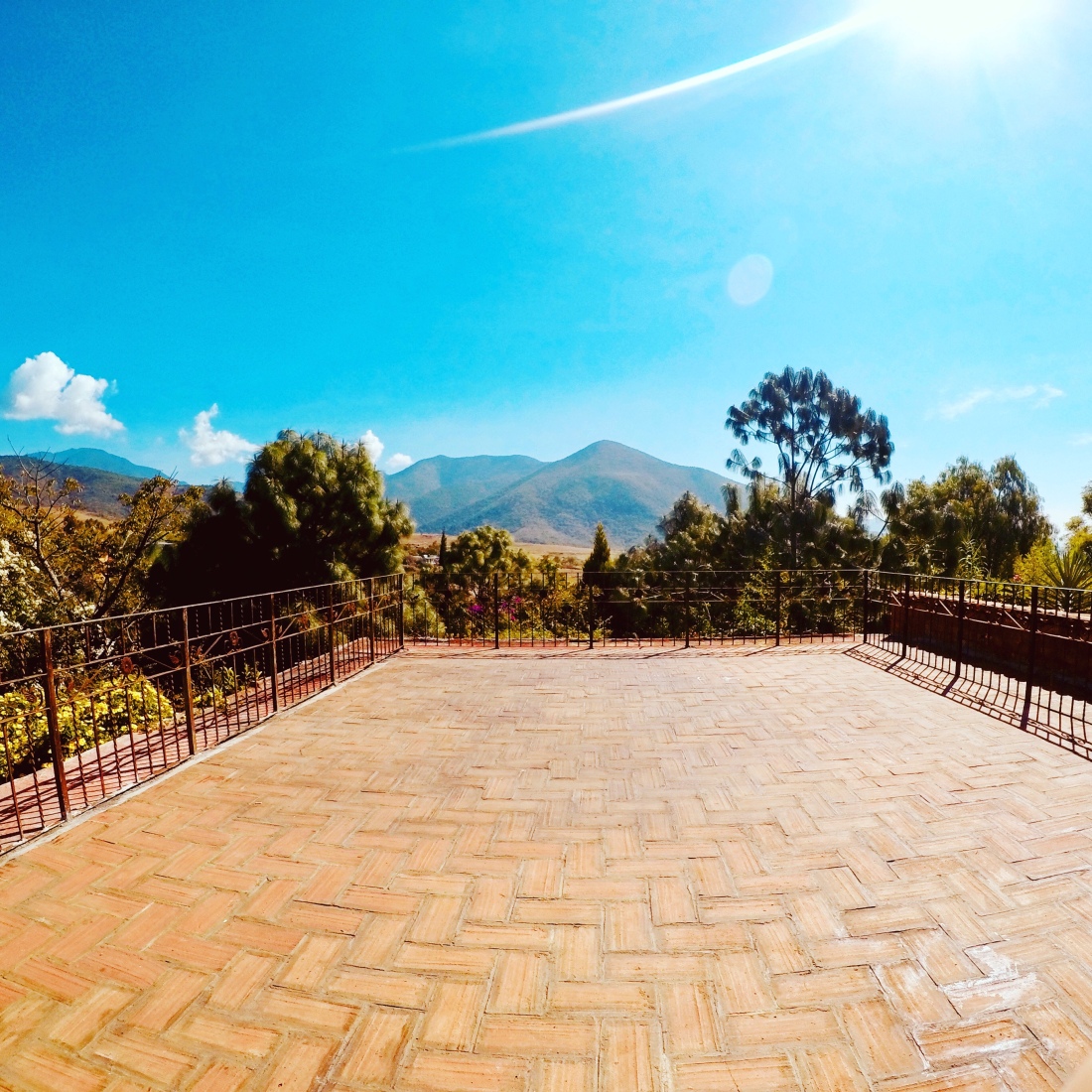 Our first day started with a cooking class, learning how to make traditional Oaxaca cuisine from scratch- from boiling the corn together with chalk to soften and grind, knead and flatten into corn tortillas, to making the “mucho pica” 🌶🌶🌶 salsas verde and rojo. Lots of fun, and we also got a proper lesson on Mexican mezcal! For which I have since developed a probably not too healthy obsession for 🙈! 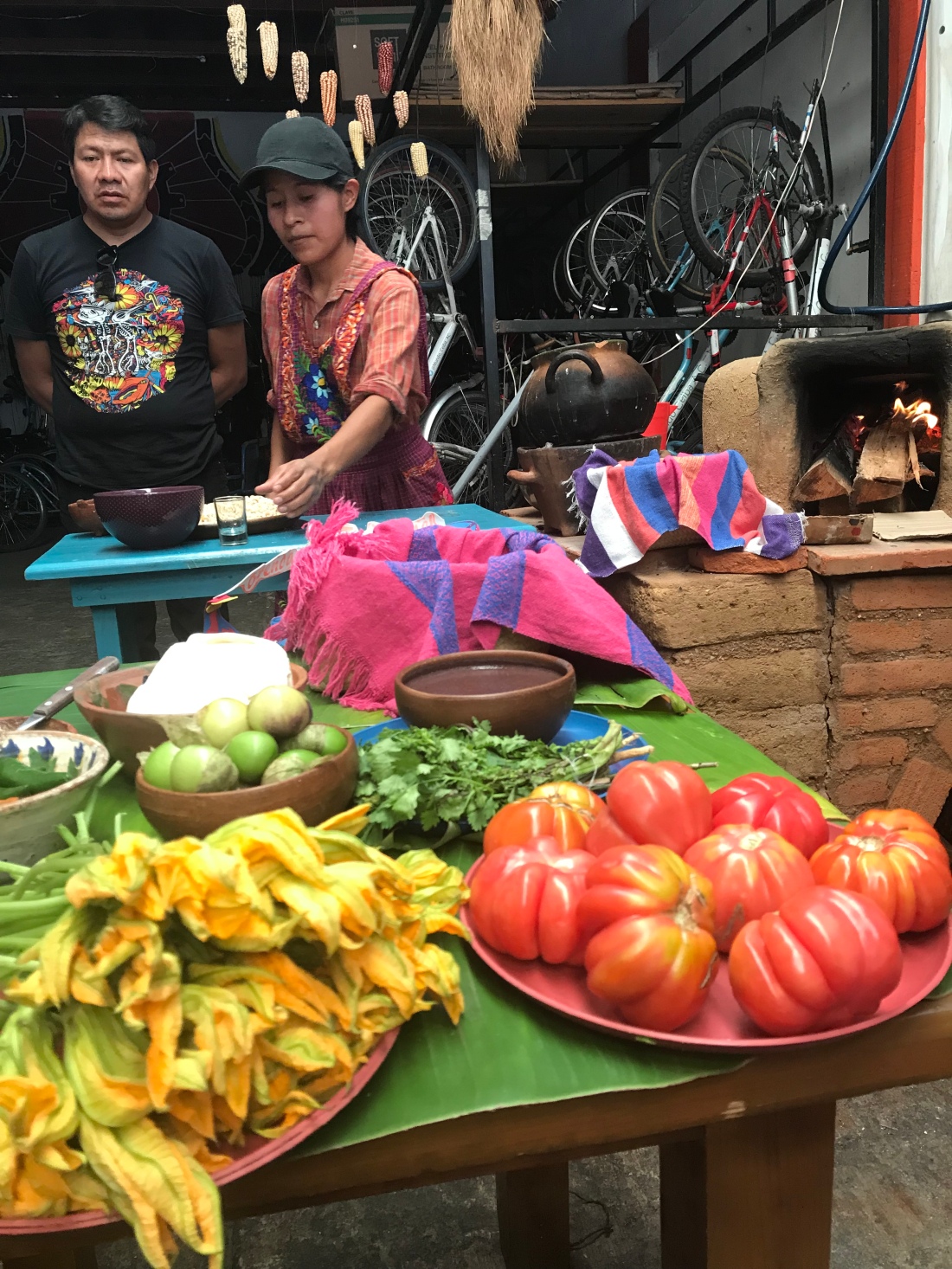 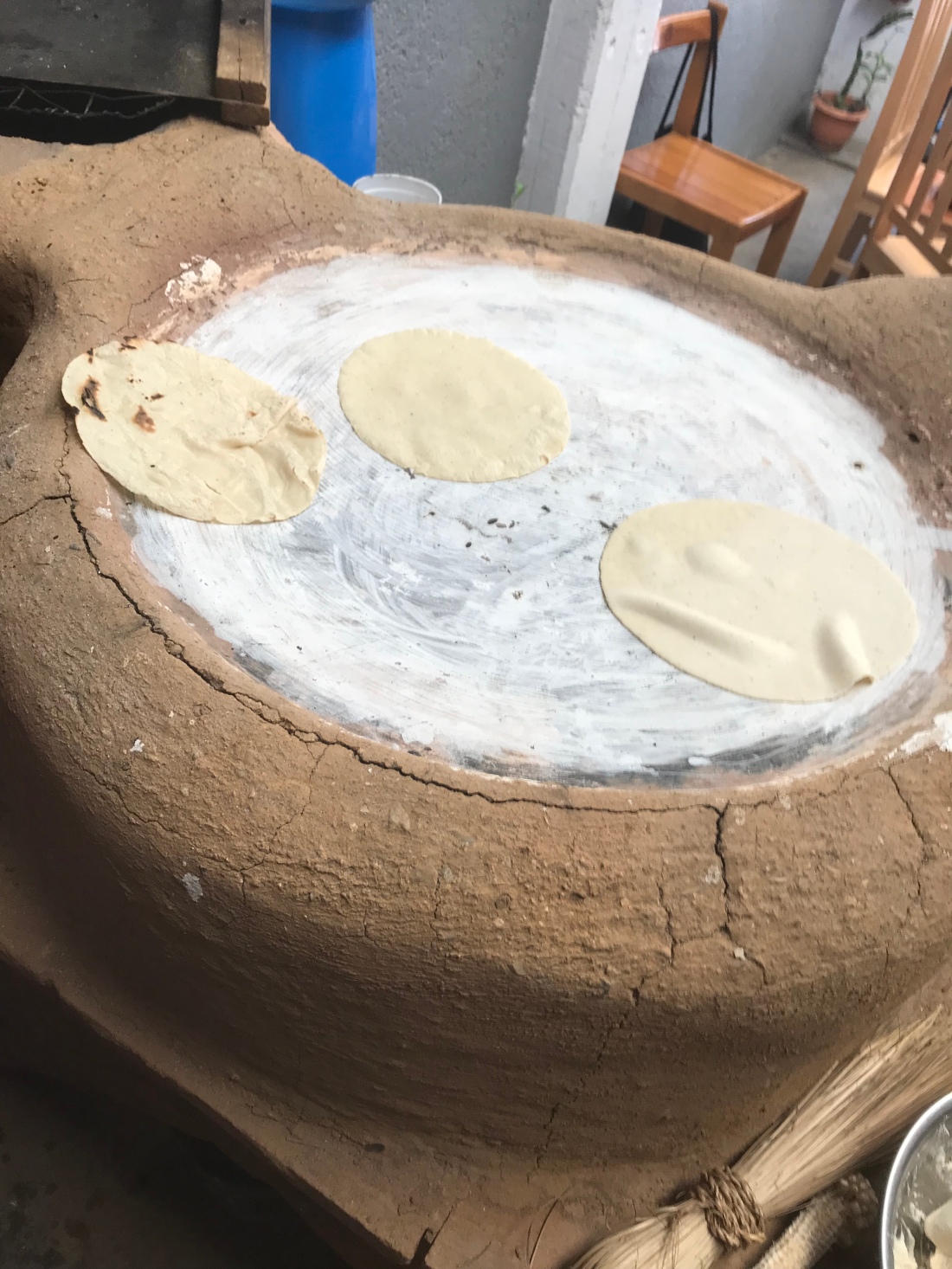 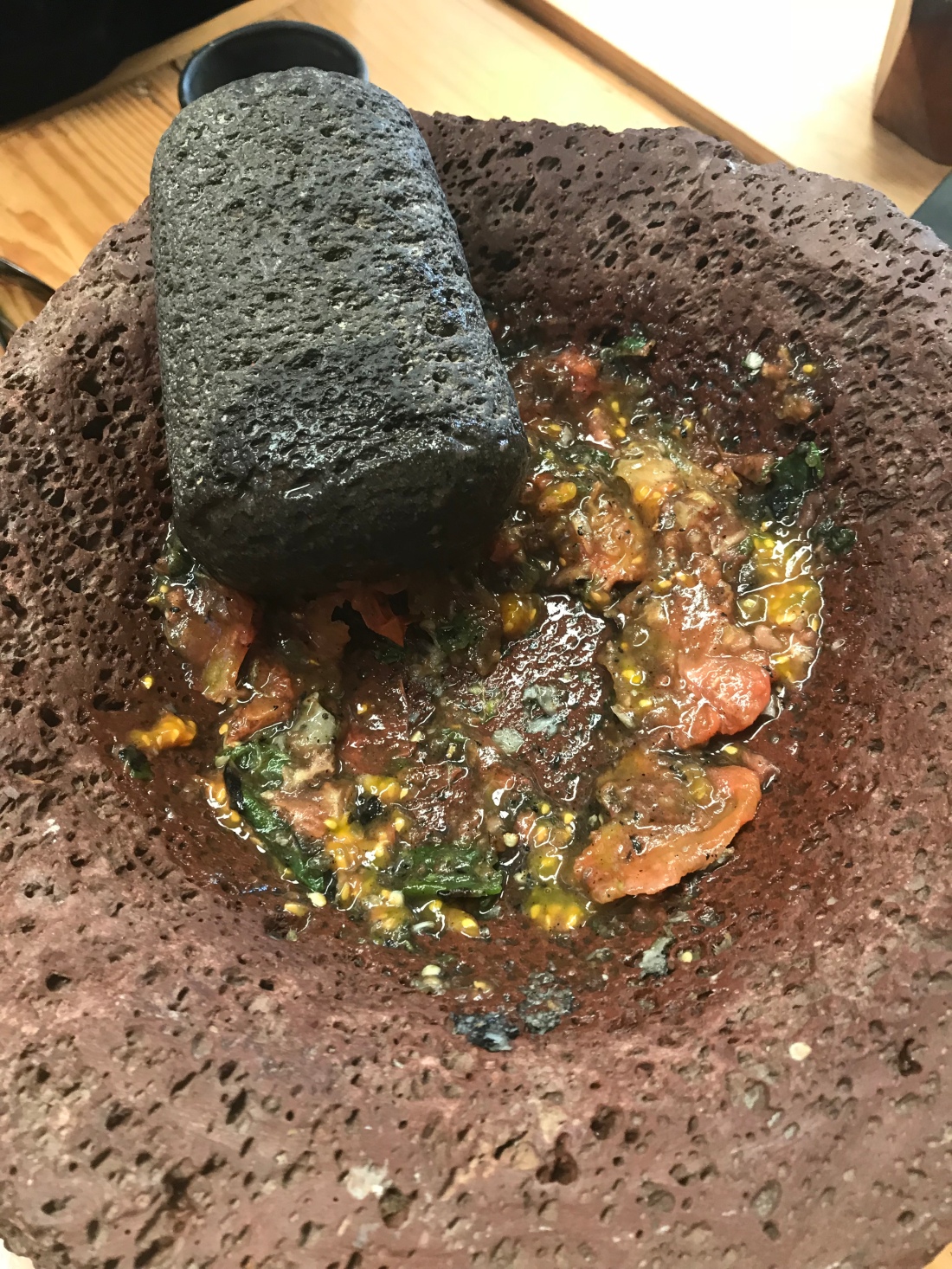 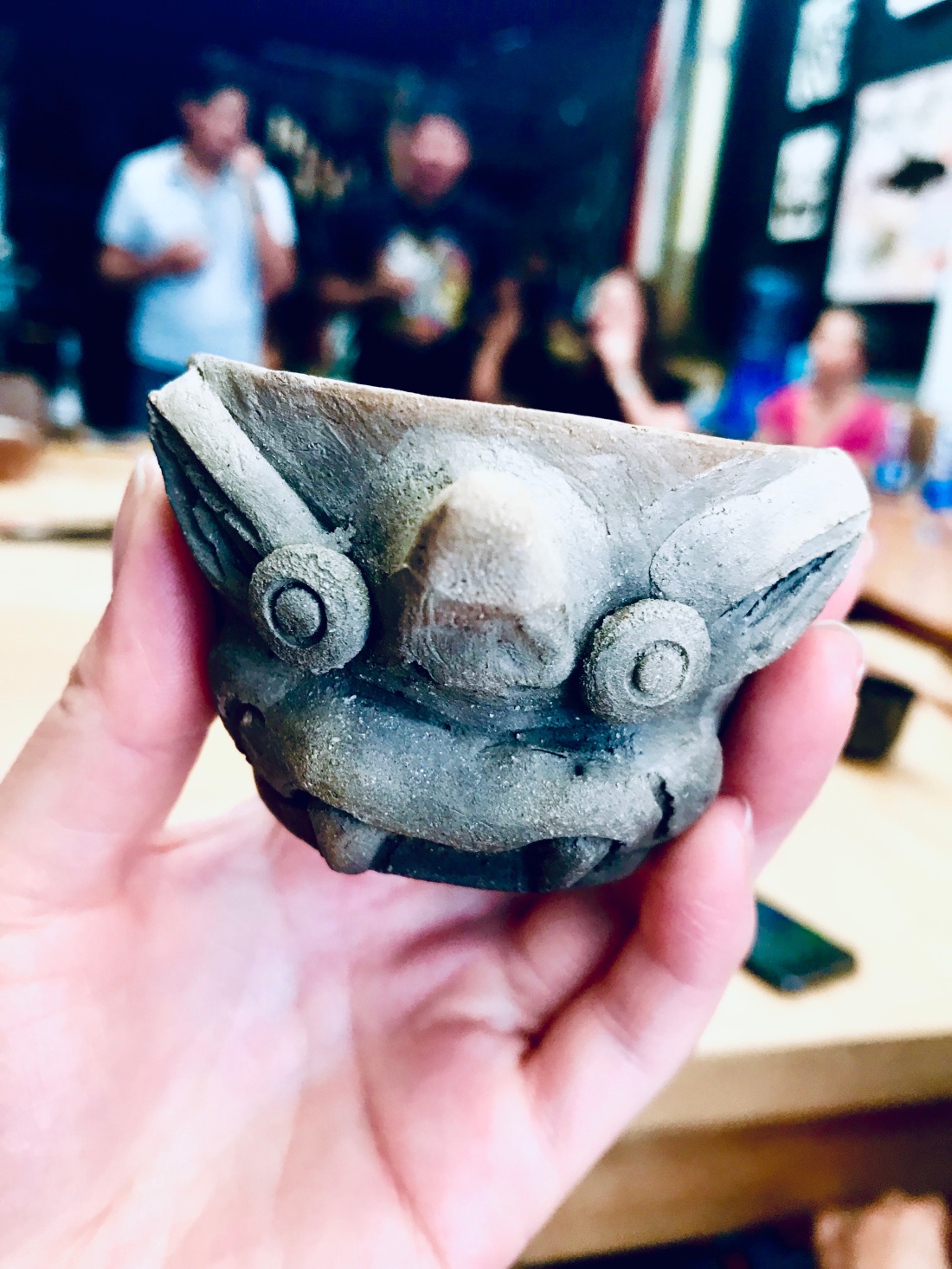 The real highlight of Oaxaca though is its City center… absolutely stunning and came even more alive with day of the dead decorations and festivities.

We had an afternoon free so used it to explore the little streets, cute jewelry shops and markets, before getting our faces painted for the procession that evening. 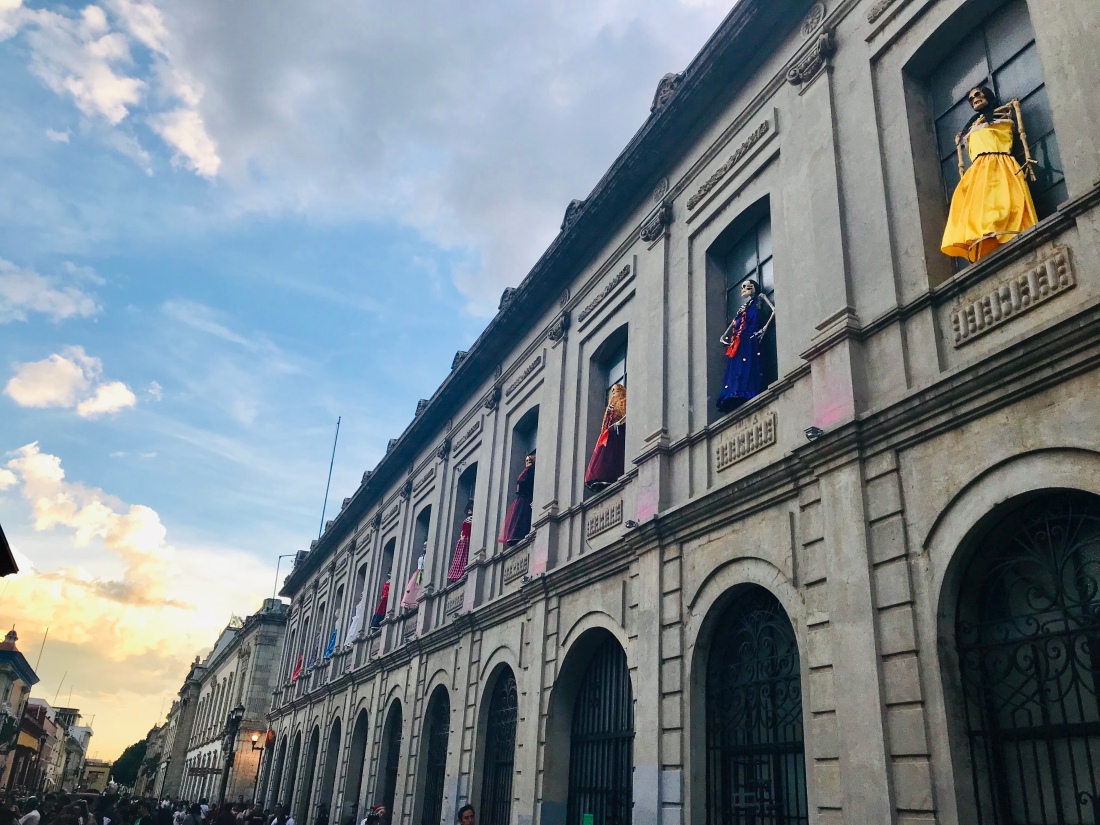 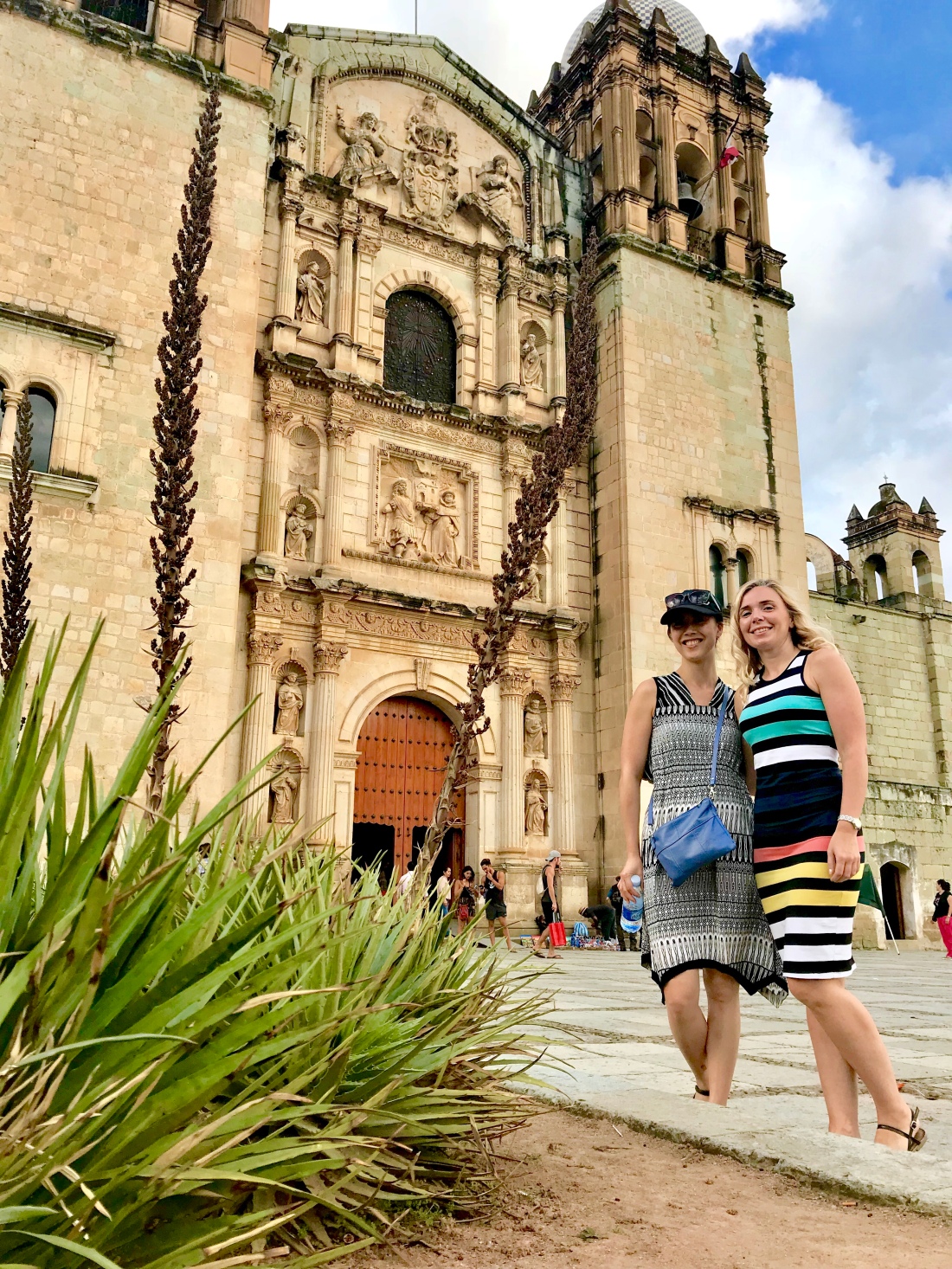 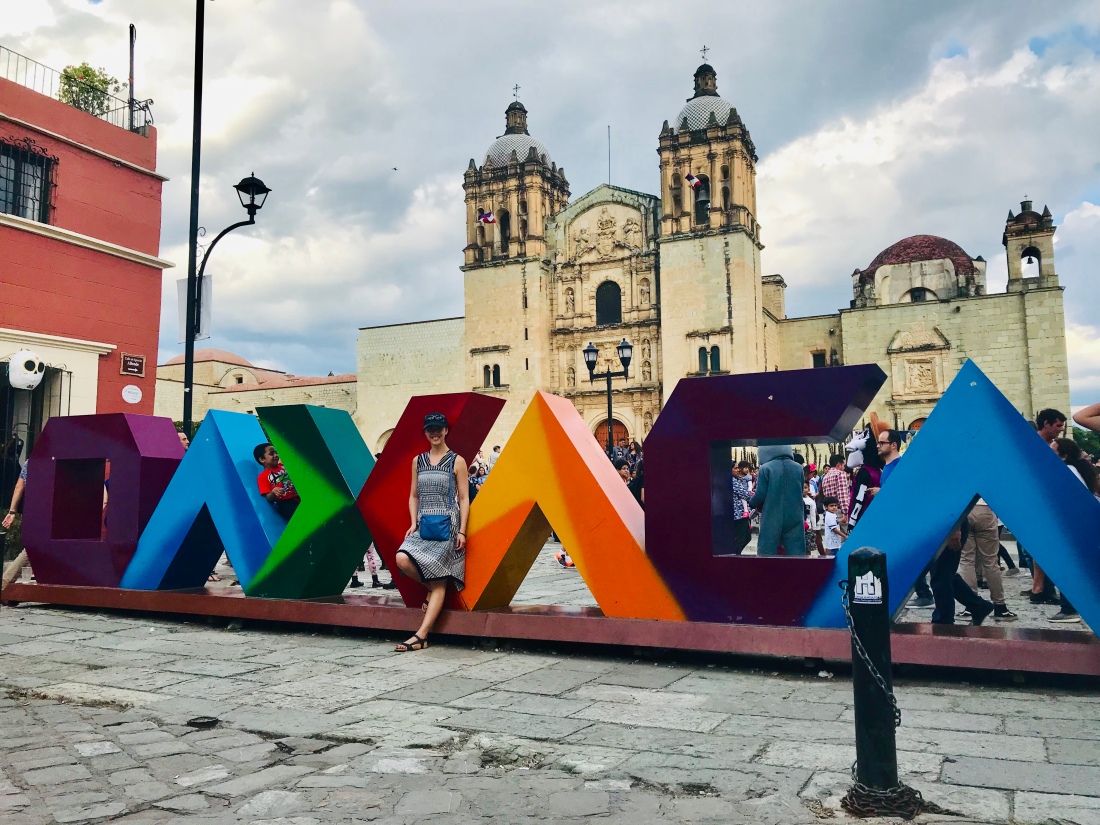 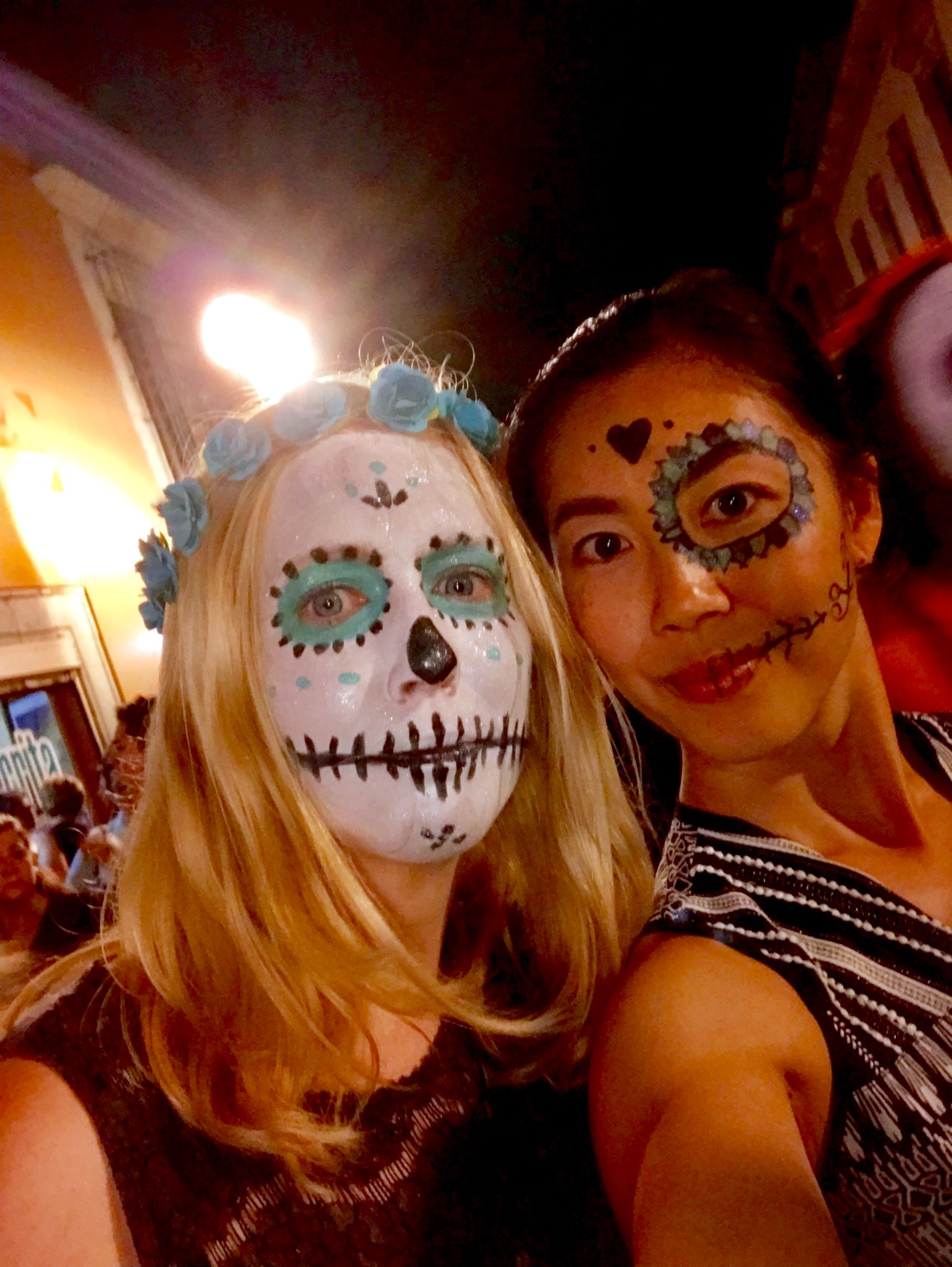 At around 7, we started to make our way to the main church square where the procession would be taking place. The previously quiet little square had drastically transformed and was by now packed with people, fireworks, music and spectacular processions. Not even the sudden pouring rain (which happens like clockwork in Mexico!) could dampen the mood of this crowd! 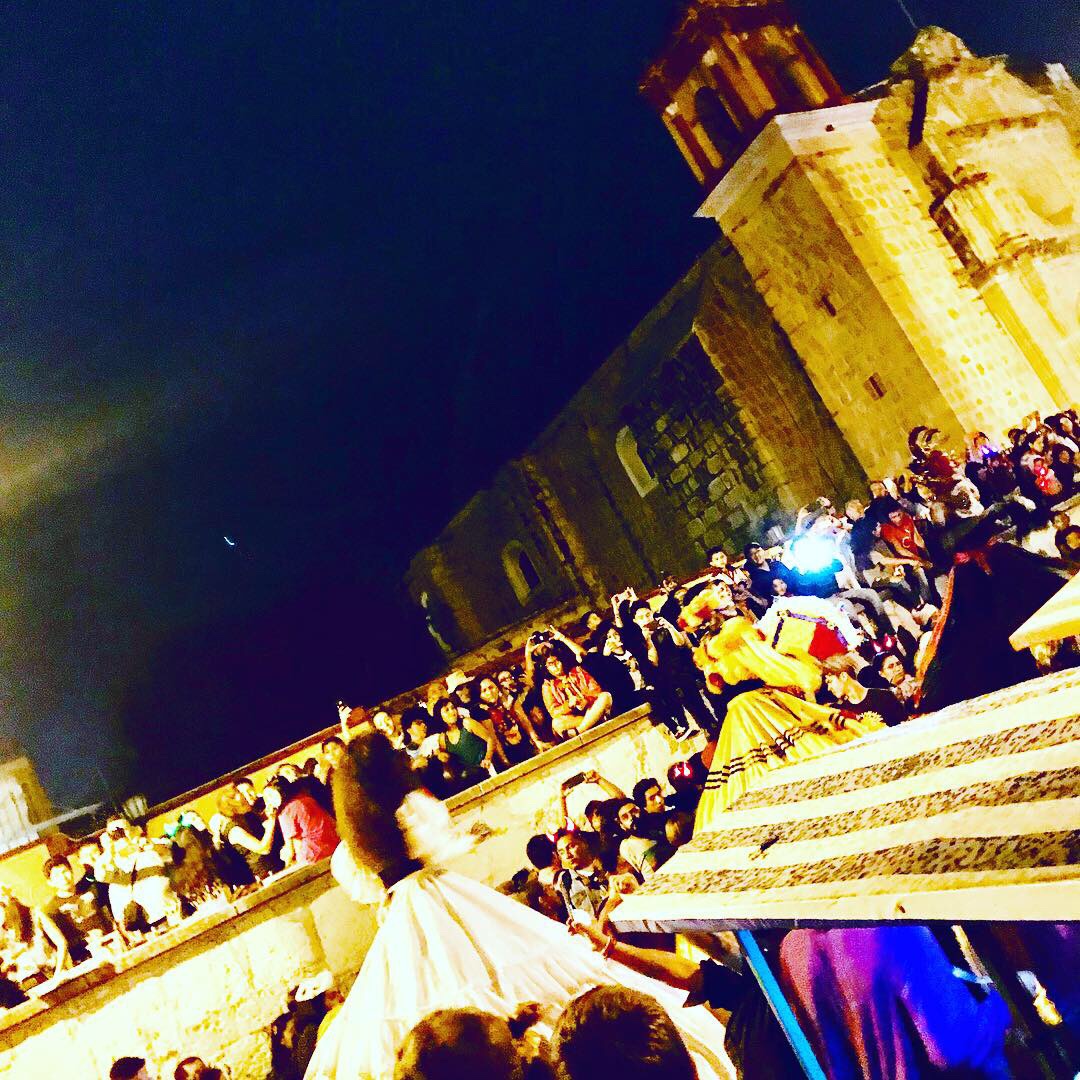 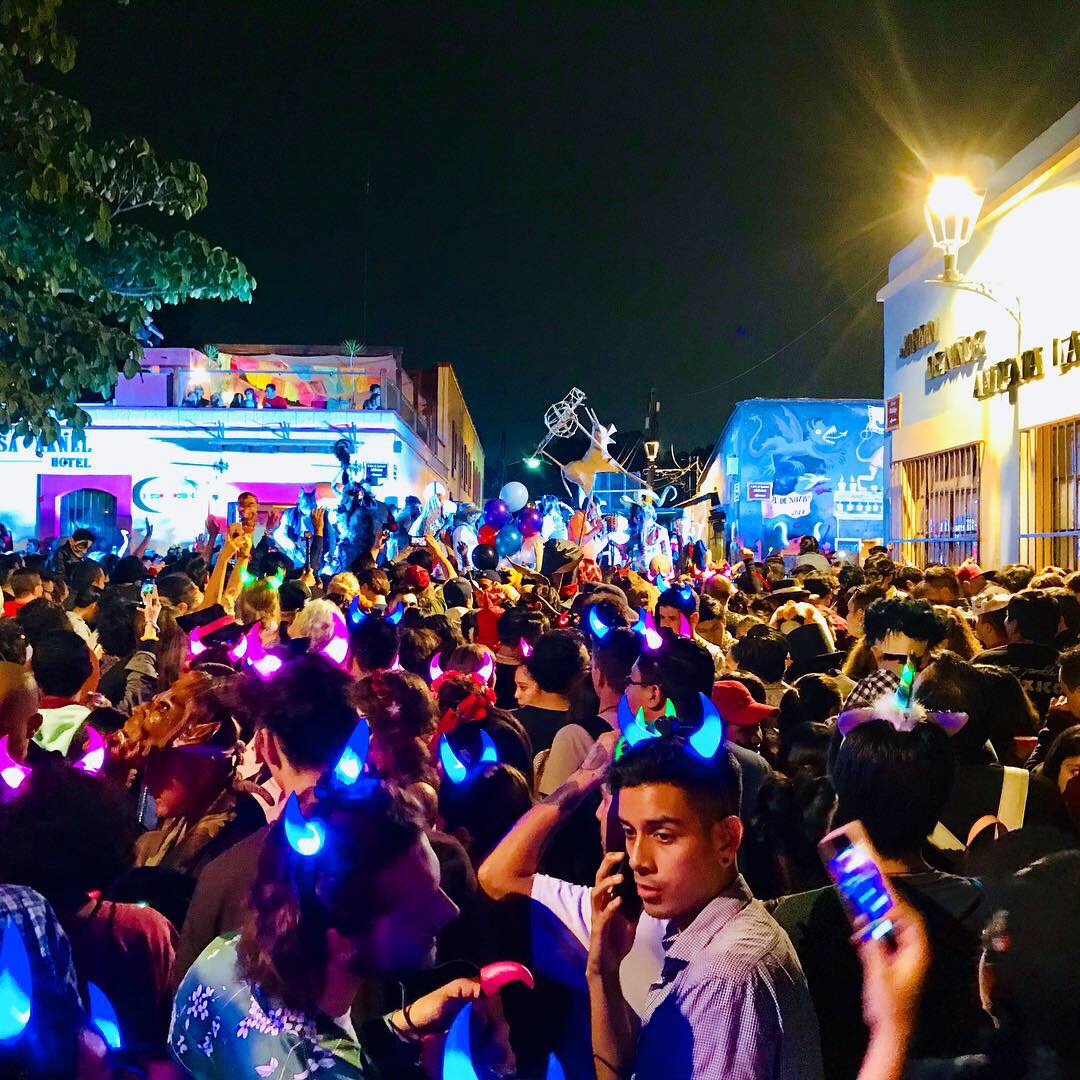 Our final evening led to my roomie and I stumbling across a grand procession of bicycles! Hundreds and hundreds of them cycling to the beat of pumping Latin music from a loudspeaker on the back of the lead rider’s tricycle, and apparently a tradition in the City. We went on a brief adventure following them, through the rainy Oaxaca streets. Soaking wet but having so much fun. 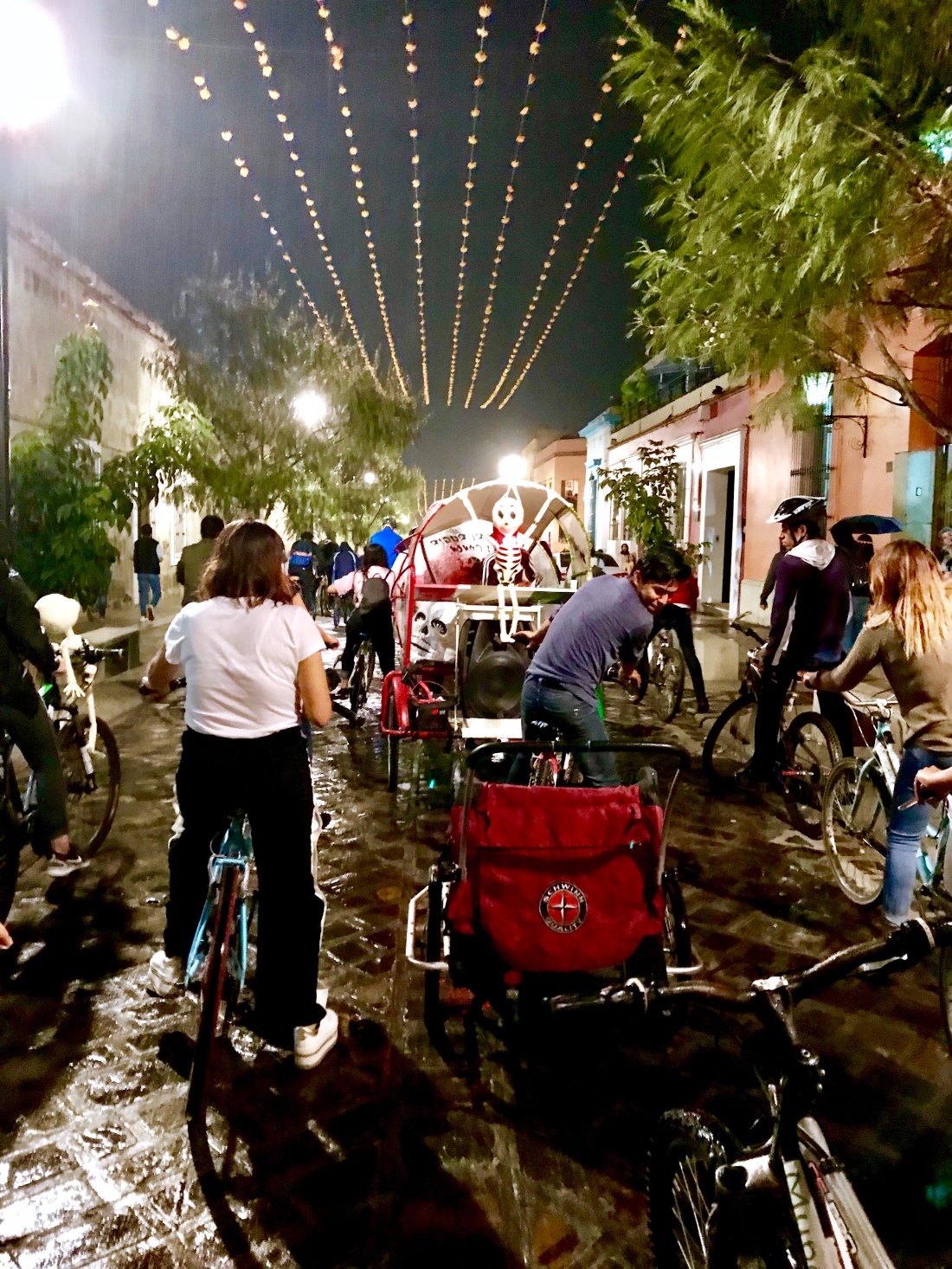 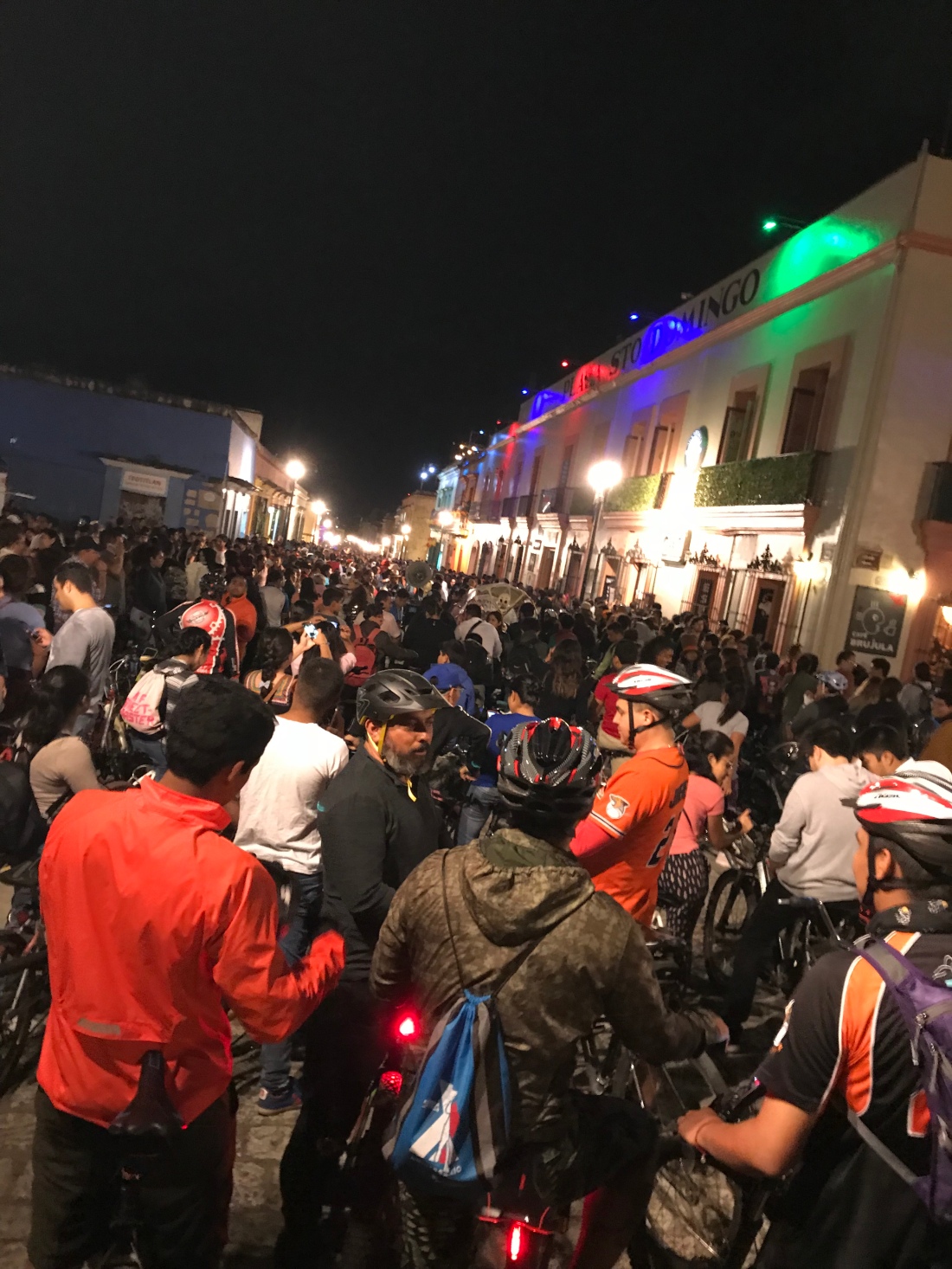 Love love LOVE this place. Never wanted to leave!! Due to a small glitch in our previously arranged accommodation, we had to be moved to an alternative hotel on the beach. It was a trade off of either stunning views from the top of the sea, or having the sea at our doorstep. We happily chose for the latter! 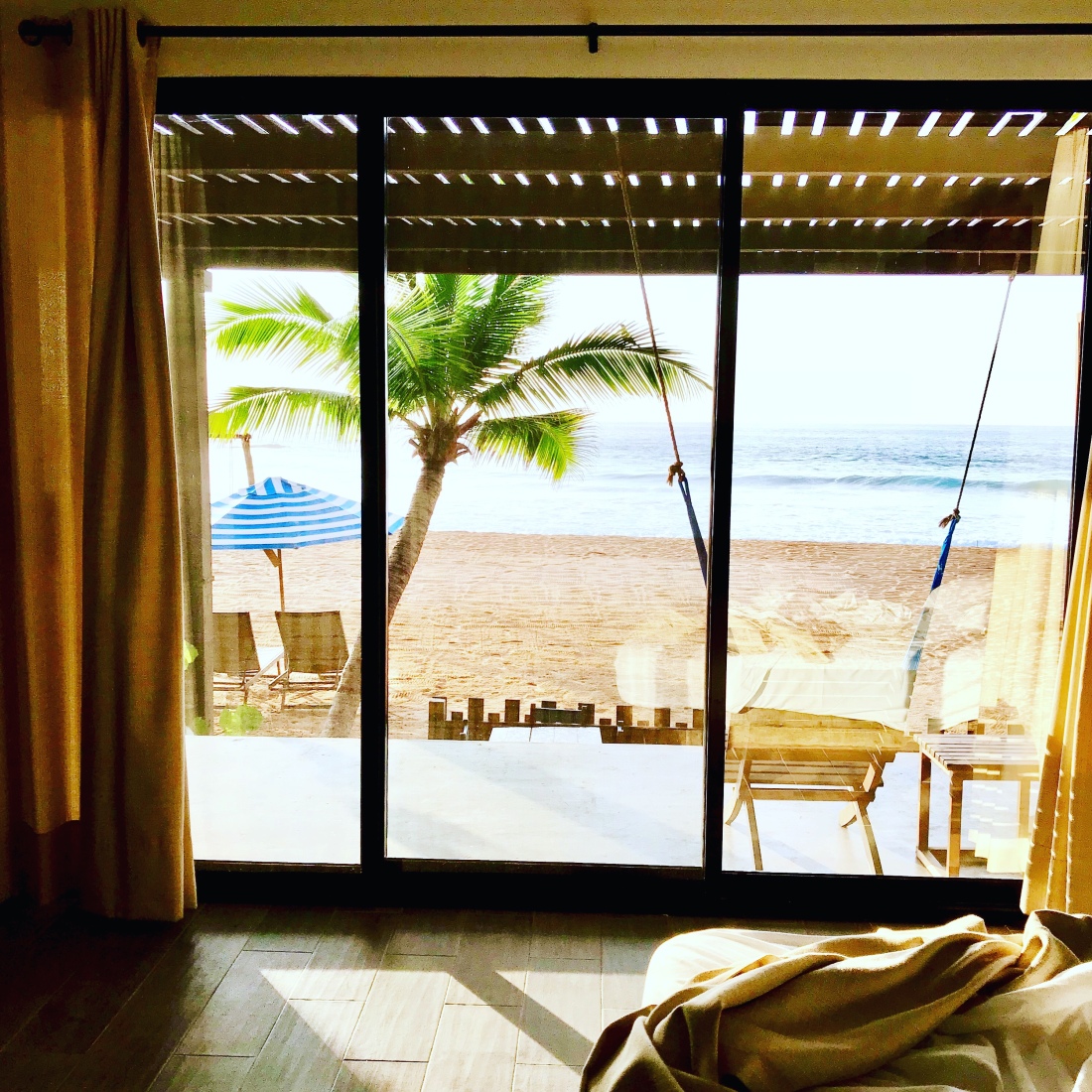 After the once again long drive from Oaxaca to Mazunte, exhausting the limited playlists we were able to download in advance with patchy mountain WiFi, we were happy to freshen up and move a few meters to settle on the beachfront, with margaritas, cervezas and cerviche… need I say more!

St Augustine beach is small, relaxed and stunning, with once again the friendliest locals more than willing to help should you look lost (difficult given the size of the small strip) or otherwise confused. The best time to enjoy the beach is in the early morning.. before it gets busy. 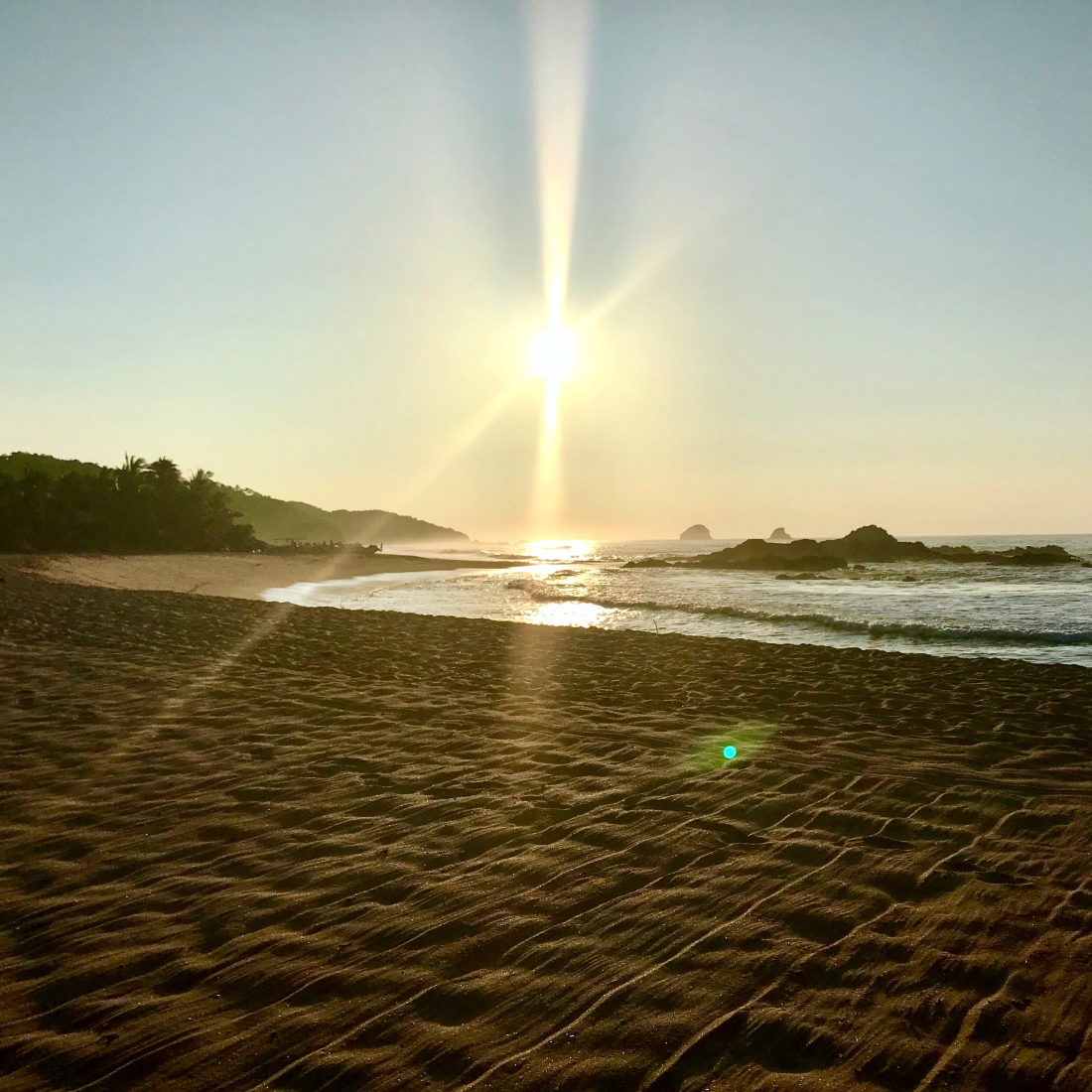 We decided to skip the turtle sanctuary tour the second afternoon and instead make the most of our time on the beach… including my first attempt surfing! Even though I could only stay standing a few seconds, it felt huge given my fear of the sea since an accident involving a massive wave in Tahiti 2 years ago!

I definitely recommend the surf schools here and the teachers are excellent in helping you lose your fears. 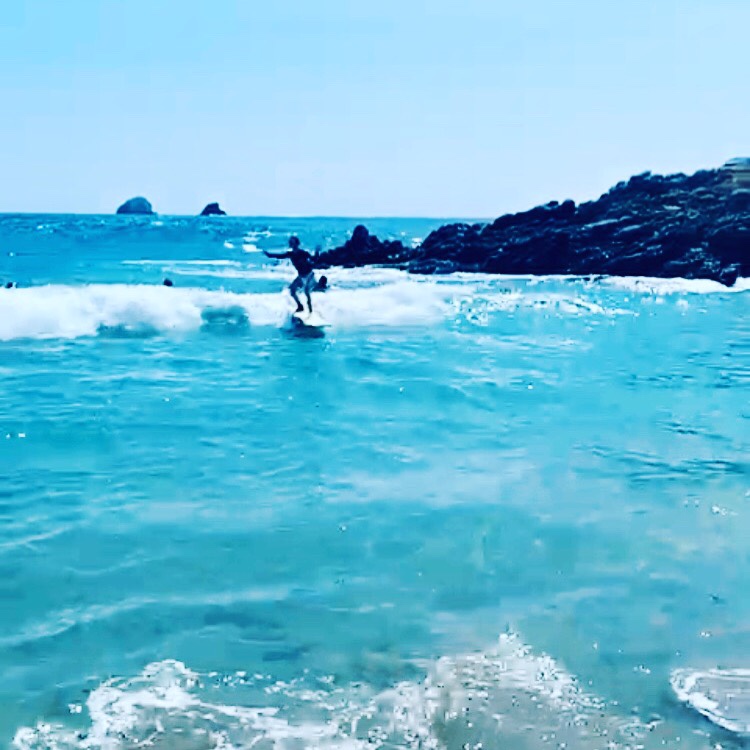 The rest of the town Mazunte is small but quaint, there is a Santander ATM machine and some little shops selling clothes, swimwear, local souvenirs. Apparently it was quieter due to the low rainy season and more lively with bars and parties happening during the dry seasons.

After two wonderful nights, we said goodbye to the beautiful paradise before returning to Mexico City for our onward flights and travel plans.

Next… adventures in Ecuador.. 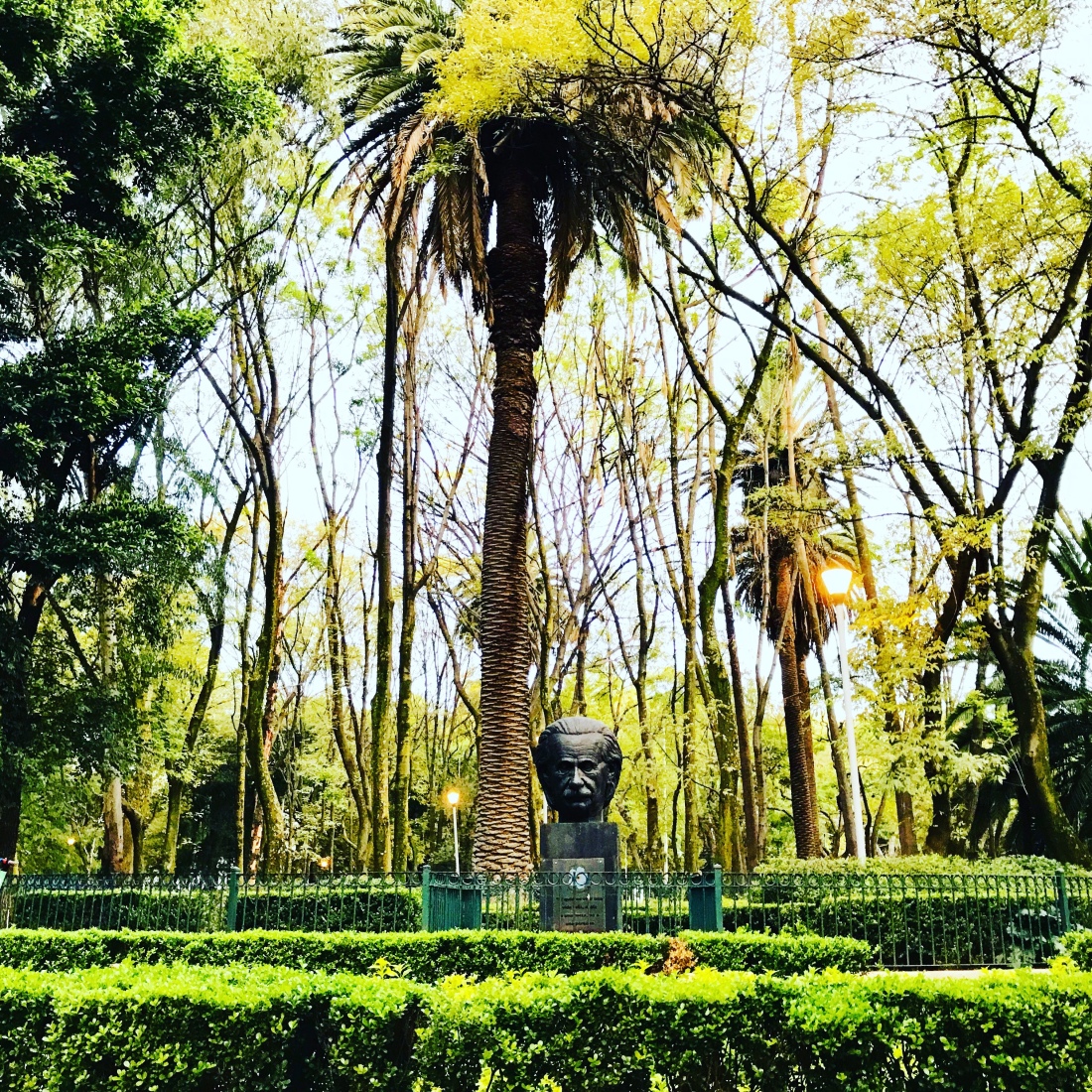 I’ve been a bit delayed in the writing of this post. Result of a hectic on the road schedule and overwhelming amounts of information to absorb.

Mexico I can truly say has been a destination of wonder, surprise and thanks to the 3 excellent guides we had from Exxi Mexico (shout to Carlos, Fede, Ivan) allowed us to get to a deeper understanding of the cultural roots and pre-Hispanic history that defines the underlying identity of the country and it’s people.

I’ve broken this post up into 2 parts to properly do justice.

Below are a few of the highlights from the trip as well as tips for fellow travelers planning a visit.

The area we stayed was the hip and bohemian Condesa, bordering the equally cool district of La Roma. Known for its tree-lined streets, safe neighborhoods, designer boutiques, cafes and restaurants… and a LOT of dogs. This is a city that takes its pets seriously! From mobile dog washes in minivans to dog schools in the lush Parque España and Parque México. Having very little real knowledge of Mexico asides from the news and films, I was properly charmed.

The shot above is of Parque México, during an early morning workout, with plenty of early morning dog walkers and curious dogs watching on.

Day 1 was one of exploration. Knowing the next next 10 days would be intensive touring with my Spanish language group (Battersea Spanish) I was happy to wander on my own to get a feel for the City.

Condesa and La Roma are both dotted with varieties of street art, brought back by urbanized returning Mexicans from graffiti scenes of the US in the 90s and developed it’s own style from there. 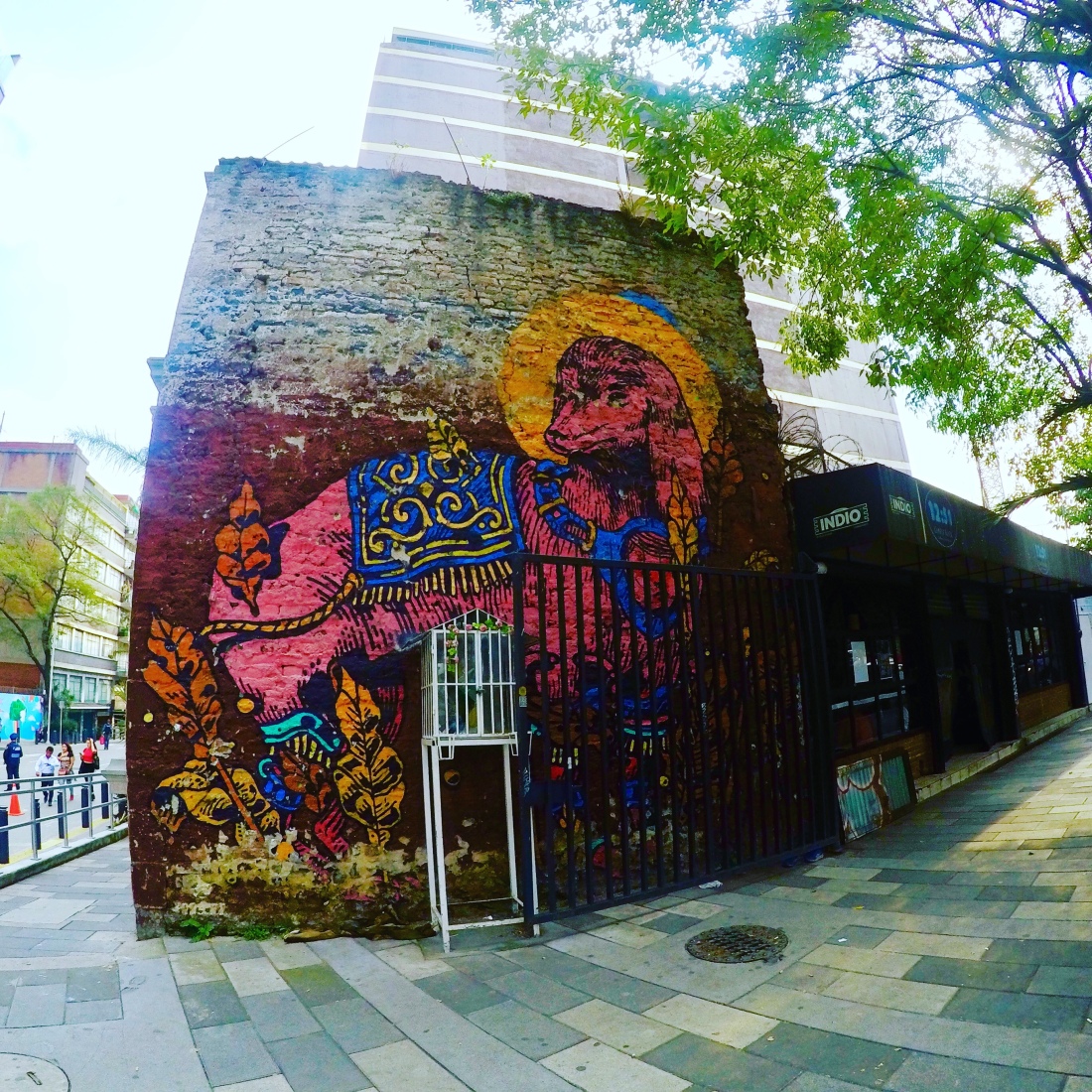 In terms of the activities to do, our tour covered a massive amount of cultural immersion. Highlights were

• Lucha libre… which was hilarious and reminded me of 80s style video games (Mexican free fighting where the fighters wear colorful masks and costumes). 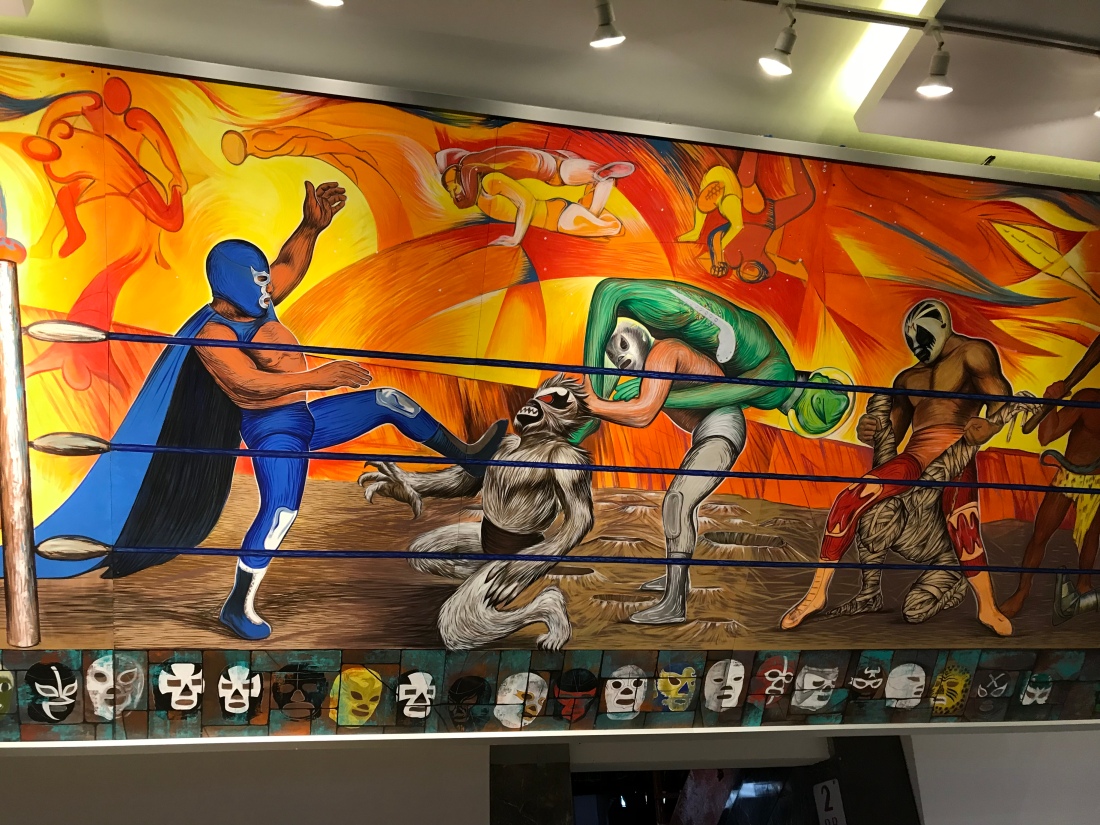 • Frida house and the Diego Rivera museum Anahuacalli. Honestly I found the characters of who they were much more interesting than their actual art- but still worth a visit to somewhat get a view into the minds of two fascinating artists. Photos are not allowed at the museum unless you pay a permit fee of 30 pesos.. about $1.4.

• For history buffs, the national anthropology museum and the sun and moon pyramids of Teotihuacán (pyramide del sol y pyramide de la Luna) are well worth a visit. It is worth to get a guide at both as you really get to the richness of the stories behind these ancient civilizations of Olmecas, Mayans, Incas – such as the ancient game of Juego de Pelotas, involving bouncing a 3kg ball with their hip, and where any wrong move could result in a human sacrifice (perceived as an honour in the times)!! 😱 Needless to say these pre-hispanic civilizations had a very different relationship to death compared to what we have now!

The sun and moon pyramids are worth the climb up. We only ended up doing the bigger sun pyramid, and after the steep flight of tiny stairs up and down, we were pretty much done. 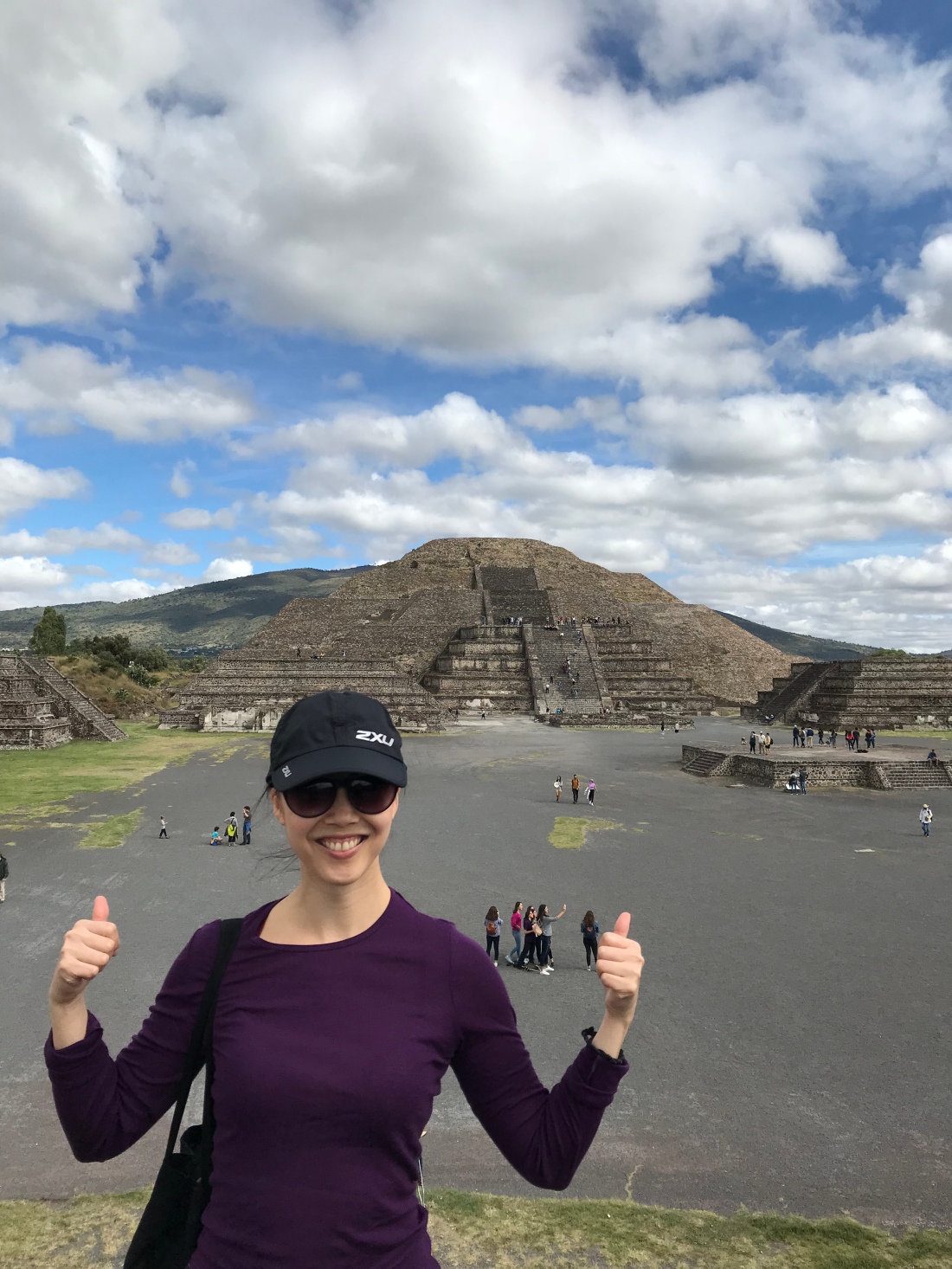 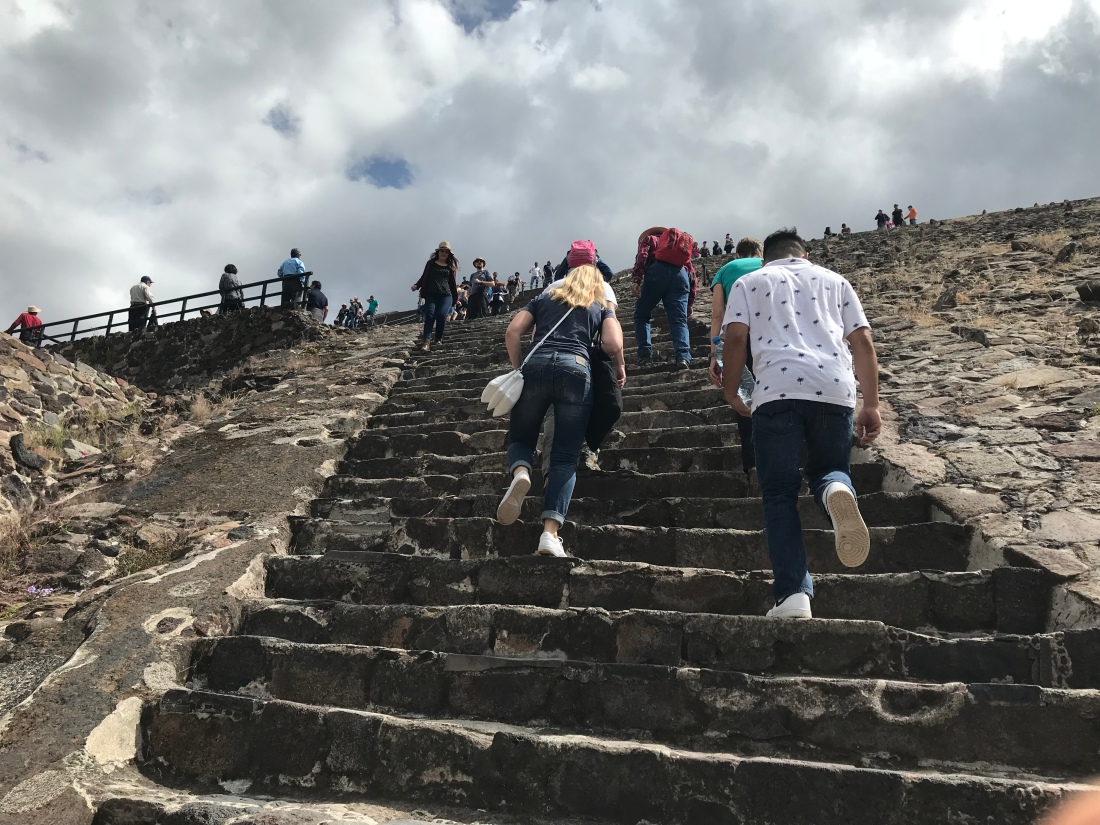 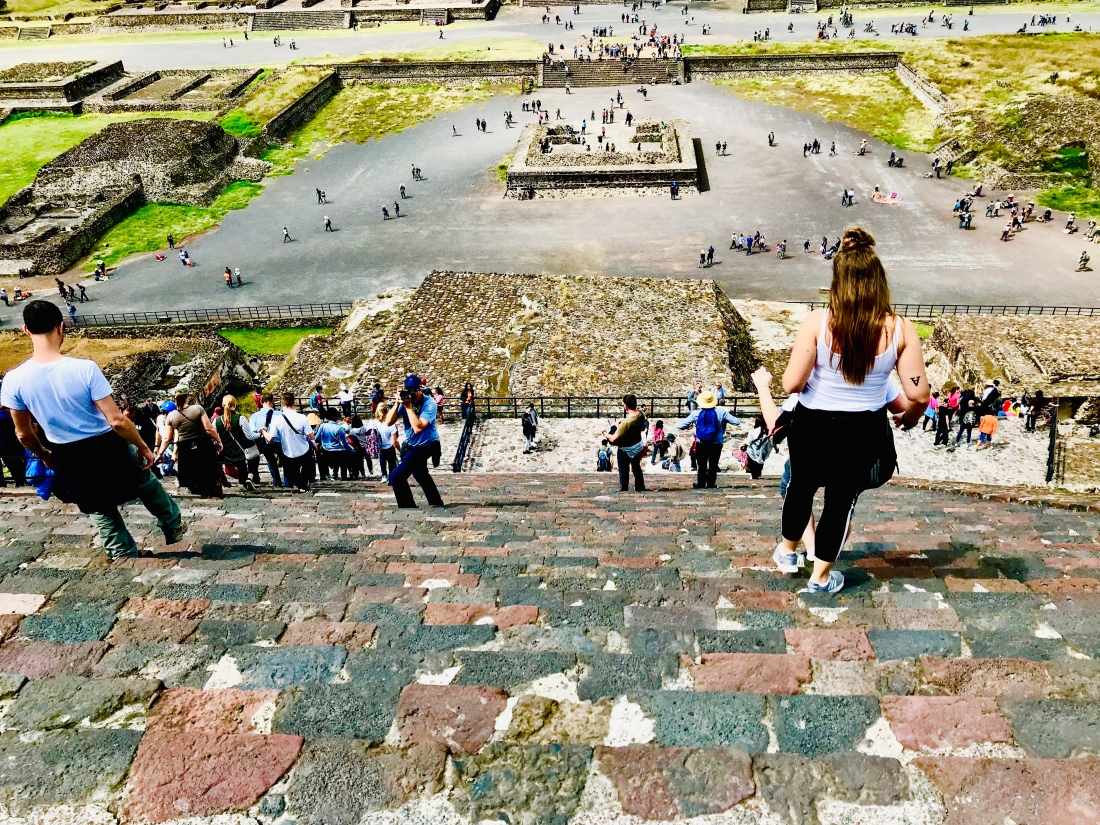 I would skip Plaza Garibaldi unless you enjoy the sound of 5 different mariachi bands blasting next to your ear during dinner.

Food wise….Mexican is not a vegetarian friendly cuisine! Unless salsa, guacamole and beans count. Those you will find at almost every meal! 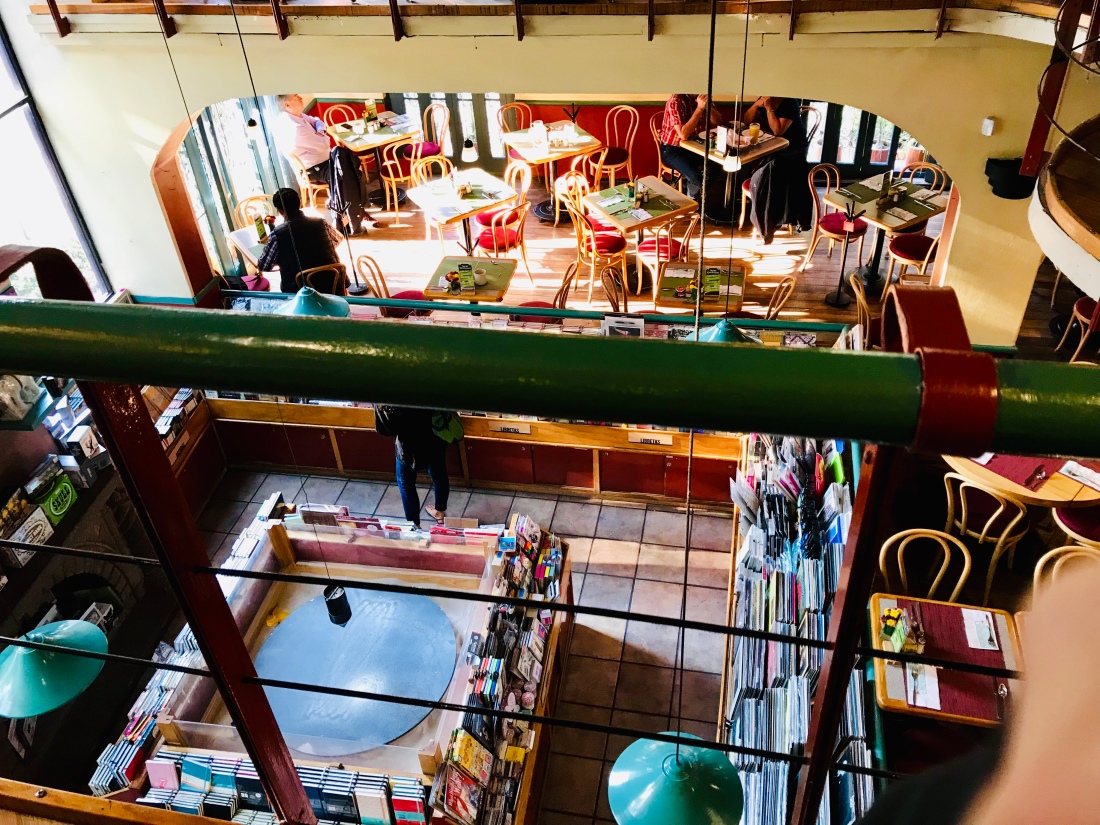 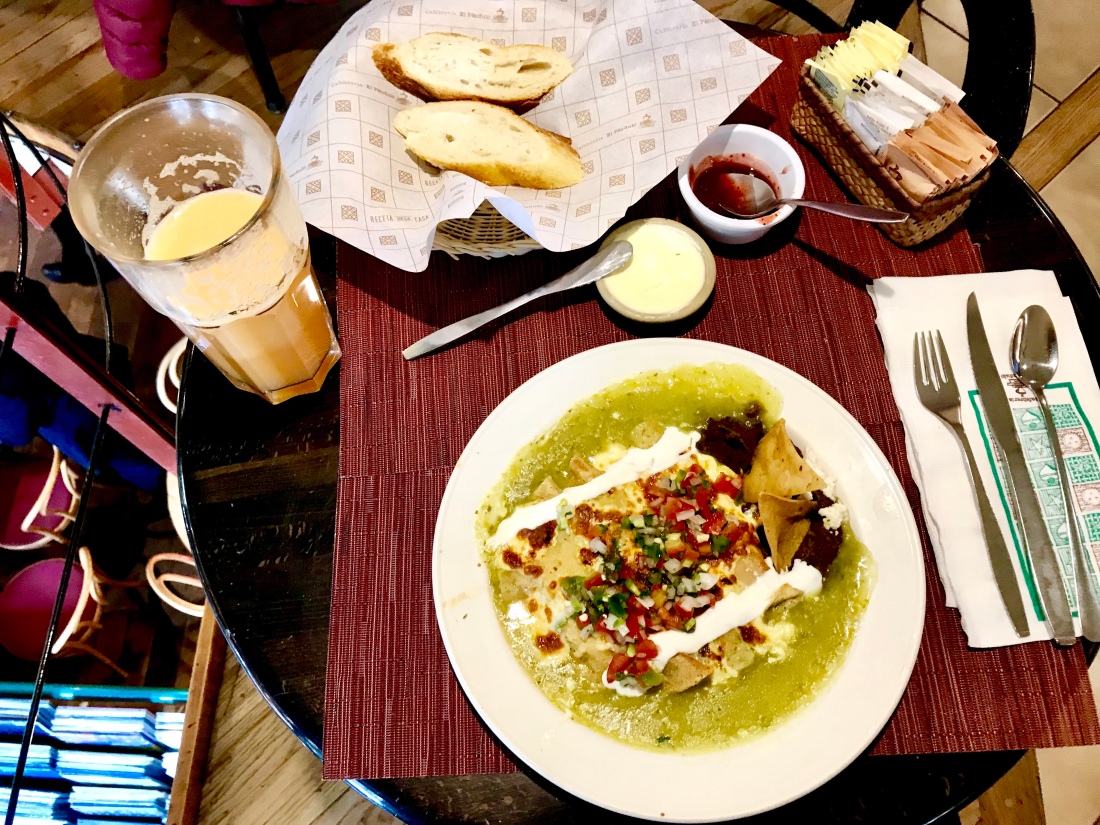 There will be no limit of Taquerias and you will find these on every street. I came across this newly opened one, where the owner upon finding out it’s my first day in Mexico, warmly introduced me to every item on the menu including sample tasters ! Taqueria La Nación 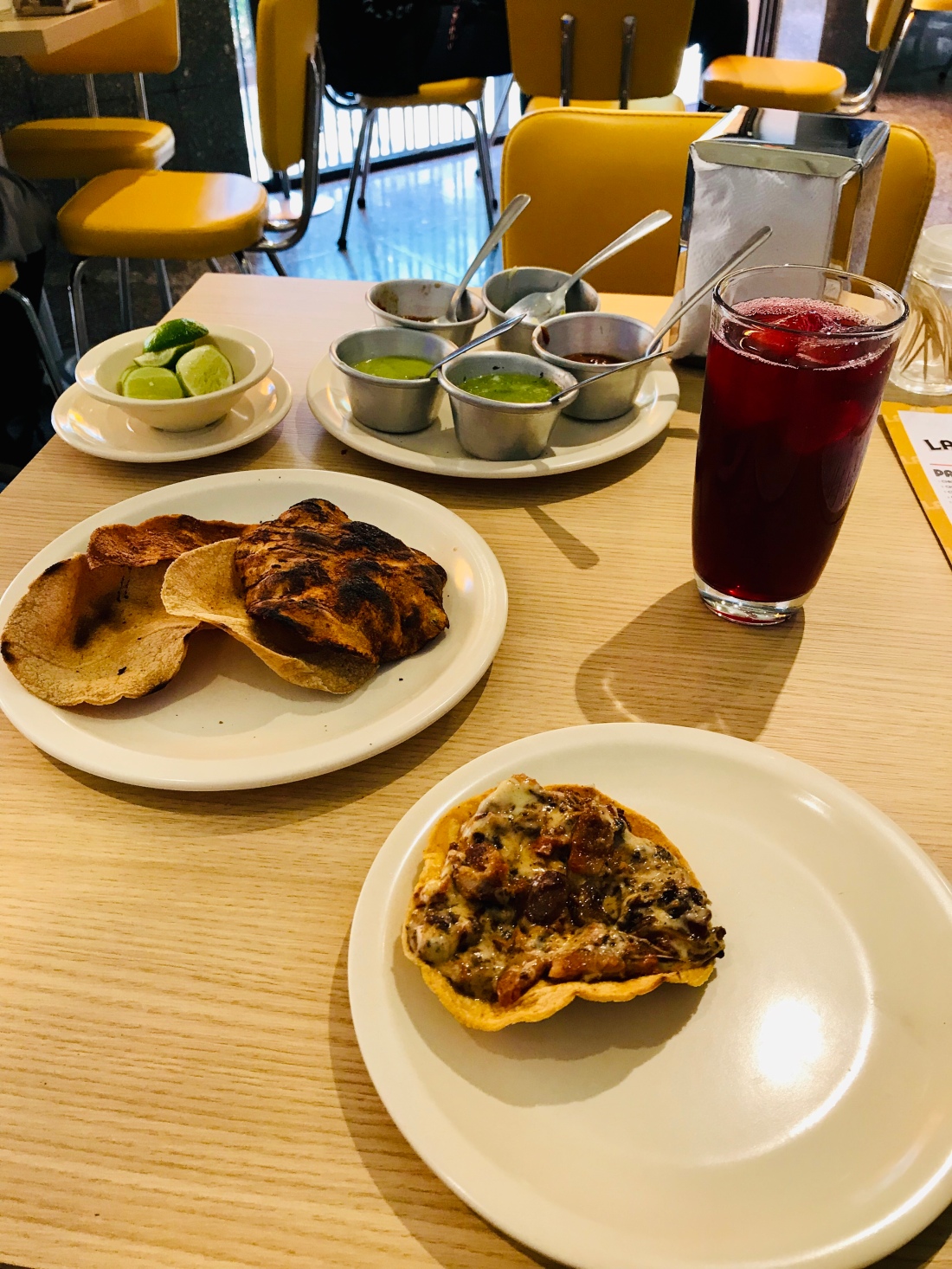 Having said all of this though… I must say, my best meals in Mexico were late at night and on the street … where vendors sell deliciously stuffed tacos for 8 pesos a piece!!! Look out if the street stall is busy with people… and as advised by our Mexican guides, follow the smells!

Overall, I was overwhelmed by the incredible friendliness and eagerness to help (including patience with my terribly broken Spanish) of Mexico City. Which gave me an intro towards the days to come…

This part of the post is short as we ended up only staying overnight in this adorable little city. We arrived in Puebla after an exhausting day of museums and a long drive… and after dumping our bags at the hotel, my roomie and I decided to head out and explore the surroundings.

Those that are familiar with the Day of the Dead (día de los muertos) will know that this is serious business in Mexico! And the celebration lasts for several days. Our trip to Puebla coincided with the children’s night, where kids dress up and go trick or treating with little pumpkin shaped buckets. Super cute… and wish I had more than a single chocolate bar in my bag! But the plaza in Puebla was stunning, and came alive at night with lights, people dressed in costumes and a lot of day of the dead artworks on display!

Overall, we had heard that Puebla is well known as a foodie city in Mexico, wish we could have stayed for longer… read on for the next stop Oaxaca and Mazunte! 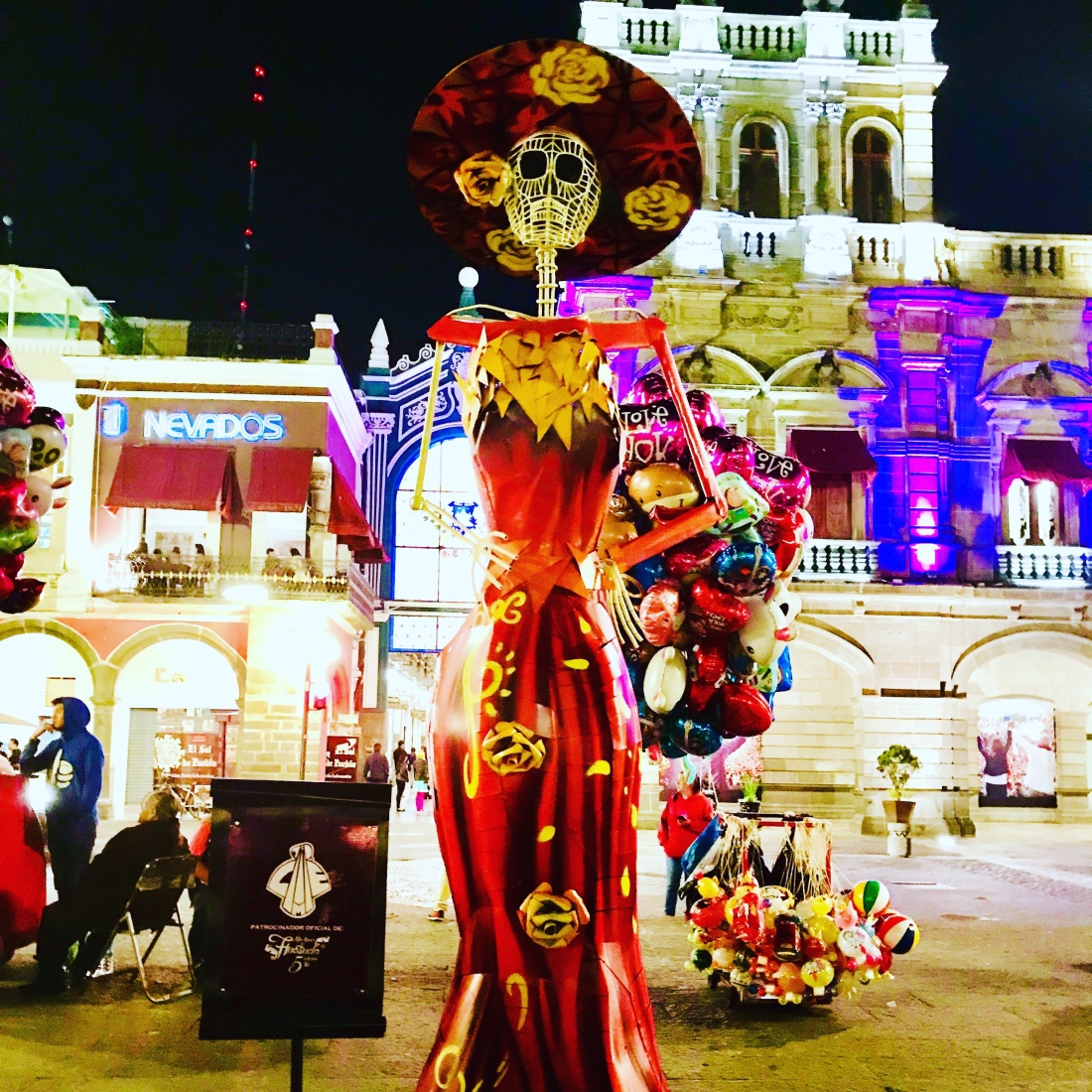 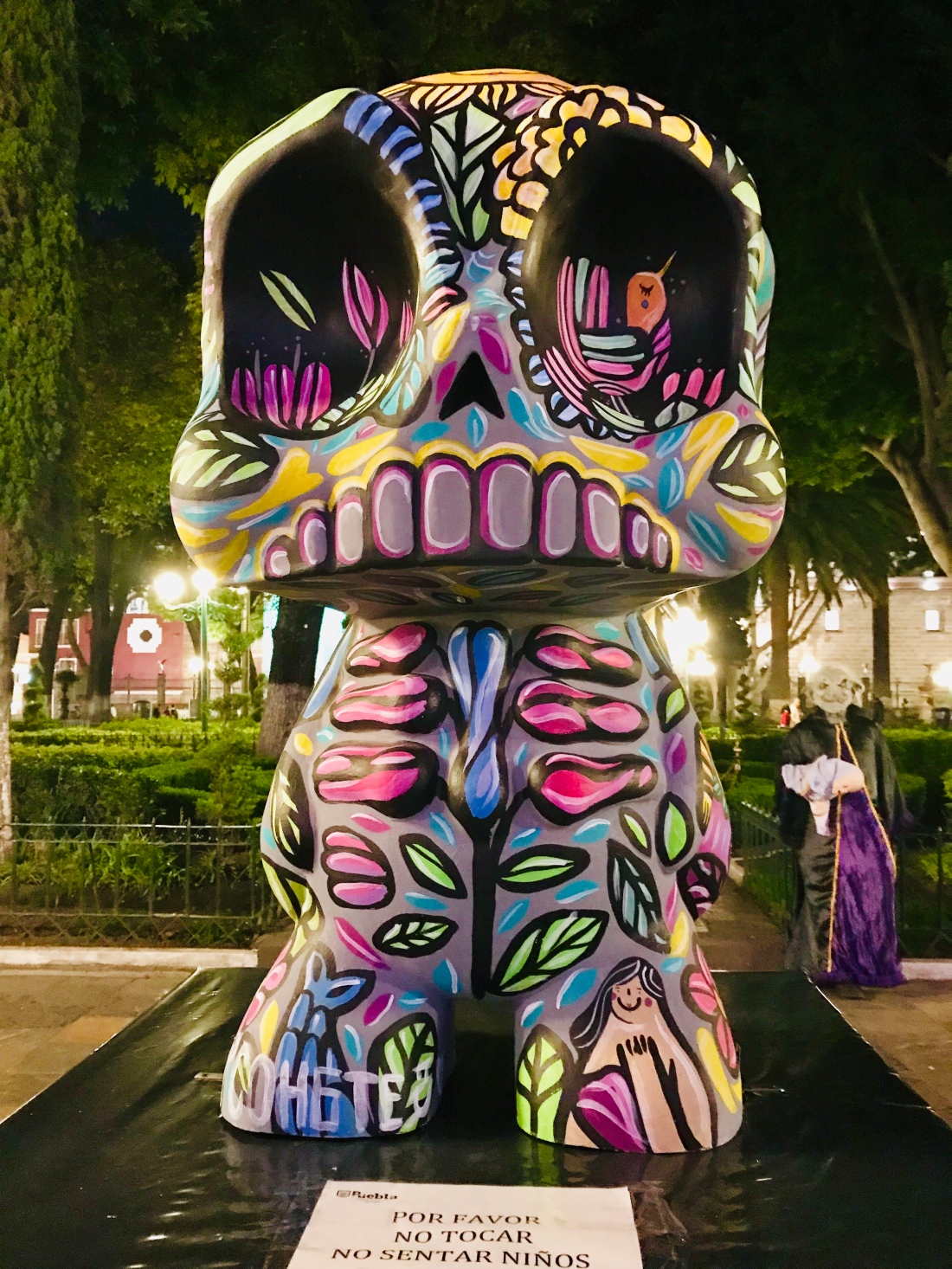 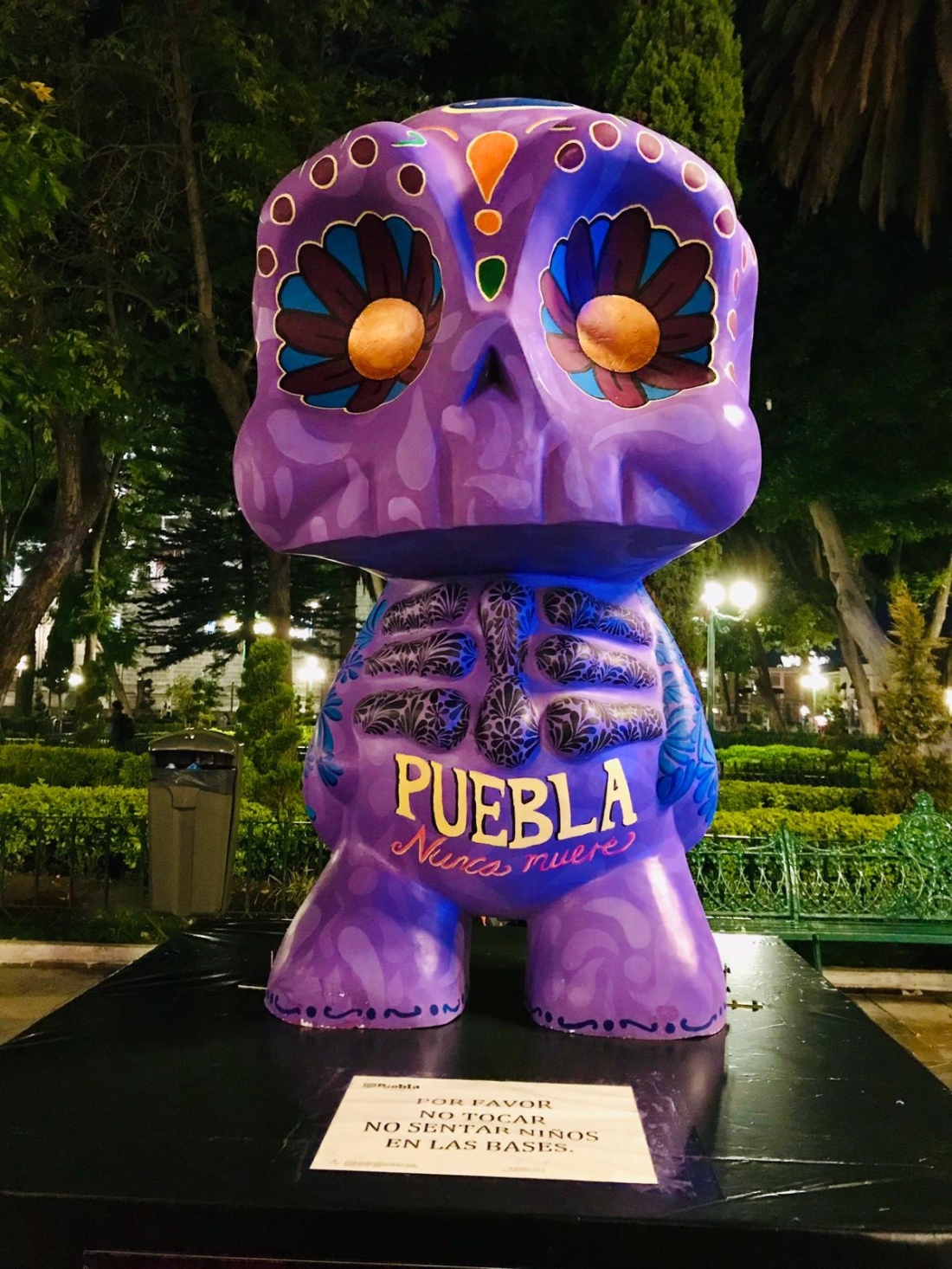